In whatever Chancellor Pamela Fleenor has been involved, she has given 100 percent and thrown herself into heart and soul. Being a judge is no exception. Chancellor Fleenor is currently serving as the president of the Tennessee Judicial Conference, an organization that represents all state judges from Memphis to Mountain City. She is the third woman to hold the position and the first judge from Chattanooga to be elected president in 30 years.

“It is important that we restore and increase the public confidence and trust in the court system,” Chancellor Fleenor said. “I want to focus on the integrity and impartiality of the system. We have good judges in our state courts who are making impartial decisions based on the admissible evidence and the applicable law. These decisions are not made with bias nor made on a whim. Judges write their decisions, and the court speaks through its orders. The order explains why the court did what it did.”

Helping educate the public on the role of courts is just one goal of the TJC. There are over a dozen committees focused on issues ranging from developing model jury instructions to court security to education.

“Anytime I am involved in an organization, I pour myself into it. I don’t want to be on the sidelines,” Chancellor Fleenor said.  “As I met more and more judges from across the state and learned their stories, I was more and more drawn to TJC. We have wonderful judges who are doing great things in their communities. Even though I am a native Tennessean, I have seen parts of the state I never knew and I have grown to love the state even more — the geography, the people, the food. We live in a great state. Being part of TJC has taught me appreciation for my state and the other judges. We are all in this together and we need to support each other.”

The main focus of the TJC is judicial education. However, fellowship among the judges is critical and something Chancellor Fleenor hopes to emphasize.

“Because of the pandemic, social distancing and virtual conferences as well as so many retirements and new judges coming on after the August 2022 election, it is essential we come together,” she said. “The relationships are priceless. Judges cannot talk about cases to anyone because it is confidential — not lawyers, not your family. But you can talk to other judges. It helps to know someone else is going through this too.”

In her courtroom, Chancellor Fleenor manages a lot of guardianships and conservatorships, which often requires her listening to heartbreaking, intimate details of people’s lives and making weighty decisions on next steps.

“Judges are often taking care of the most vulnerable people in our community. It takes a lot of compassion,” Chancellor Fleenor said. “I hope that people leave the courtroom in a better frame of mind that when they come in, especially in conservator cases. They are under stress, this is not something they chose. I think most of the time they feel they had their day in court and justice was done. They feel their loved one was cared for and will be cared for. It is very rewarding.”

Tennessee is one of three states that have chancery courts. Chancery courts are state-level courts of record that tend to oversee civil disputes where the focus is not monetary, although the lines can blur between circuit civil court and chancery court in some counties. The unique nature of chancery court drew Chancellor Fleenor to the bench.

“Chancery court has such a broad jurisdiction and I see a lot of analytical questions — boundary disputes, interpreting Tennessee statutes. Chancery court is the best of both worlds — I am able to help people and answer interesting questions of law,” she said.

An interest that followed her north up interstate 75 during her three years of law school was a love for baseball. She grew up watching Hank Aaron hit homeruns for the Atlanta Braves and often made her way to Riverfront Stadium in Cincinnati during law school to watch Pete Rose chase and break Ty Cobb’s all-time hits record. Today, she is a happy Atlanta Braves fan and can frequently be found with her husband,son, and daughter on a sports field.

“Right now, it is mostly ‘family doubles’ in tennis, but we golf too and are always active,” she said.

Chancellor Fleenor and her husband, who is also an attorney, recently added a third attorney to the family when their daughter passed the Tennessee bar exam in the fall of 2021.

Chancellor Fleenor will serve as TJC president until the summer of 2023. 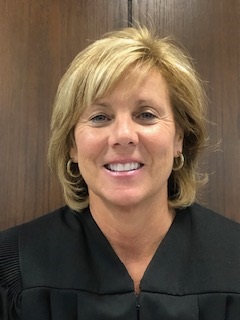