The General Assembly honored Deborah Taylor Tate with a Joint House Resolution on the House floor today. Tate retired from her post as Director of the Administrative Office of the Courts (AOC) in February.

Representative Andrew Farmer and Representative William Lamberth led efforts to establish proclamation 672, which states Deborah Taylor Tate “is to be commended for her exemplary service as Administrative Director of the Administrative Office of the Courts, and for her many years of honorable and astute service to the citizens of Tennessee.”

Taylor Tate was appointed to the AOC in January 2015 by the Supreme Court. She is credited with increasing the stature and funding of the AOC; overseeing the extensive broadening of the courts’ involvement with other branches, including the implementation of 12 safe baby courts; leading efforts to stem the impact of the opioid and addiction epidemic, and coordinating two addictions summits during the height of the pandemic. Her multidisciplinary efforts expanded access to justice programs, including, most recently, a justice bus to deliver legal and other support services to rural communities.

“This is my first opportunity to give a resolution and what an honor it is to be able to give Ms. Deborah Taylor Tate’s retirement resolution in front of this body,” Rep. Andrew Farmer said. “Talk about a lady who has achieved so much and done so many things for this body, this chamber, the chamber across the hall, this administration and many administrations beforehand. She’s given a lot of dedication in her life to making Tennessee a better place and helping it be the great state that it is today.”

“I want to thank the Tennessee Supreme Court, who reached out to me and had the confidence in me to appoint me to what is called the Sixth Justice of the Supreme Court,” said Tate. “Being an attorney, this is really the highest honor that our profession can bestow on someone, and I want to thank them for all of their support and leadership. I’m especially proud of their leadership during the pandemic, and the fact that we were able to keep courts open remotely and to protect constitutional rights. I want to thank members of the AOC here today, especially Michelle Consiglio-Young. I know this could not have happened without her.”

Taylor Tate’s reach went well beyond the borders of Tennessee as she was on the board of the Conference of State Court Administrators and was co-chair of the National Judicial Opioid Task Force.  She also served the Juvenile Justice Task Force, the Tennessee Consolidated Retirement System Board of Trustees, the Information Systems Council, the Human Trafficking Advisory Council, the Three Branch Institute and Tennessee Domestic Violence State Coordinating Council.

Taylor Tate is a former Commissioner of the Federal Communications Commission. She was twice nominated to the FCC by then President George W. Bush and unanimously approved by the U.S. Senate. Her professional career in Tennessee State Government began as Assistant Legal Counsel and Senior Policy Advisor to former Tennessee Governors Don Sundquist and Lamar Alexander.

Taylor Tate is a fifth generation Tennessee native, raised in Murfreesboro. She received her Bachelor of Arts and Juris Doctorate degrees from the University of Tennessee at Knoxville. She also studied at Vanderbilt Law School while working as Governor Alexander’s law clerk.

The proclamation ends with this message, “We extend to Deborah Taylor Tate our heartfelt wishes for a happy and fulfilling retirement, offering our deepest gratitude for her distinguished service to the state and wishing her every continued success in her future endeavors.”

“There’s no greater challenge and no greater honor than public service and you are all truly public servants,” Taylor Tate said. “I’m forever grateful for this honor, for this moment, for you giving me this opportunity to publicly say thank you to all of you and to the Supreme Court to which I owe so much.”

Taylor Tate thanked former Governors Alexander and Sundquist for giving her many opportunities which launched her career at a young age and enabled her to receive a presidential appointment. She ended her remarks with words from the Bible scripture, Micah 6:8 “Do justice, show mercy and walk humbly with God.”

To watch the presentation, please click here. Next, select the "Welcoming and Honoring" option in the index below the video box. 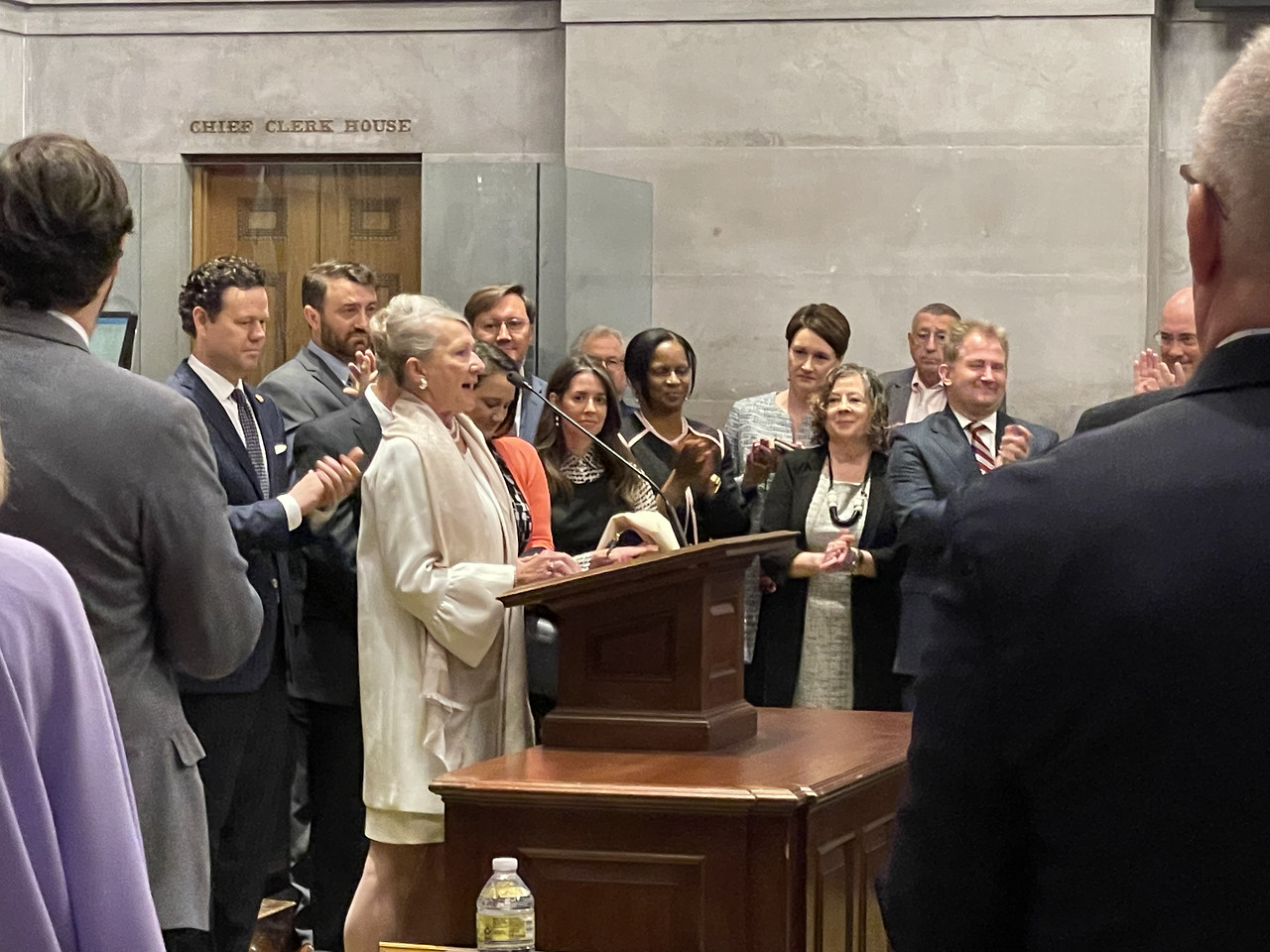