“On behalf of Judge Brock and our father’s family, I can’t really express to all of you here what an honor it is to join you,” said Judge Brock’s son Adam Brock. “Two, almost three years, after his passing, I still see the impact that he’s had on his community of peers, the community he served, and the State of Tennessee. It’s all the testament that one would need to give credence to the kind of man that you knew him to be. It warms our hearts to see and get to know a couple of his peers a little bit better.”

“I echo everything Adam said,” said Judge Brock’s daughter Sarah Kathryn (Katye) Bodak. “It’s funny, I’m the baby, I’m the only girl, so my brothers say that I was very spoiled. I was daddy’s little girl, so I think even after he passed away I have learned so much more about the impact he had on his community, on the judiciary, and on the state, and it’s just humbling to me. I know if he were here today, he would stand up here and say, ‘Why in the world did you do this? You shouldn’t have done this.’ He was just an incredibly humble man.”

The Leon Ruben Award for Excellence is given annually to a judge or judges who distinguish themselves through their outstanding service to the community, the conference and the judiciary as a whole. The award is named for Judge Ruben, who served as a sitting judge for 37 years in Nashville. He also served as a Metro Council Member and was known for his excellent contributions to the community. Henry County General Sessions Court Judge Vicki S. Snyder, who said Judge Brock was like a brother to her, presented the award to his family.

“His greatest gift to the judiciary and the citizens he served was his work in the area of recovery courts,” said Judge Snyder. “His tireless efforts will long be remembered by those that he left in the recovery courts different than when he first met them. Nothing brought him greater joy than to see a person understand the true gift of recovery. The only things he got greater joy from were his children and his grandchildren, and his sweetheart, Mary, and they’re here today.”

“My most recent hire for my business is actually a graduate of the drug court down here,” said Brock. “Having that person who six years ago faced what he faced — lost his child, spent time incarcerated — and to see that person now, it almost brought a tear to my eye in our work truck the other day. Again, speaking of testaments to people, the legacies and work that they do, there is no doubt that it’s a very important and critical service to the community that you all provide and I could not be prouder of my father. Again, thank you so much for having us here.”

“He was the epitome of service above self, just as Judge Ruben,” said Judge Snyder. “Justice for All. That is what we are committed to do. That’s the center stone and cornerstone of what we do. Sometimes, we are so busy with our duties and daily lives that we kind of forget that. Judge Ruben never forgot that. Tim Brock never forgot that.”

“He was the guy I went to UT games with and to Disney World with,” said Bodak. “He was my dad. He didn’t only serve his community. Looking back, he just loved to serve other people. Even in the midst of starting and maintaining five recovery courts, he would make my lunch every single day, from elementary school to the day I graduated high school. It’s just the kind of man that he was. It’s really an honor for me to stand up here in front of all of you today, just to celebrate him and the work that he did, and just to say thank you for the work that you are doing. I think even more so after his passing, I’ve just seen and deeply grown to love the recovery court system and how much it helps people, and the passion that my dad had for it. Thank you and we’re just so honored that you chose him for this and that we got to be here today.”

Judge Brock was first elected as General Sessions Judge in 1990, and added juvenile court jurisdictions and duties in 1998. A native of Franklin County Tennessee, he graduated from Middle Tennessee State University in 1979 and earned his law degree from the University of Tennessee in 1982. Judge Brock served on the executive committee of the Tennessee Council of Juvenile and Family Court Judges for many years and was a frequent presenter at conferences.

Judge Brock was a former member of the Tennessee State Drug Recovery Court Advisory Board and actively served on multiple committees for the Administrative Office of the Courts. The Coffee County Family Treatment Court, which held its first graduation in November 2019, shortly before his death, is the first and only one in the state of Tennessee. He also was one of the state’s first Safe Baby Court judges, and was a leader in expanding safe baby courts to 11 other counties in the state.

In August 2017, Judge Brock was awarded the McCain-Abernathy Award by the Tennessee Council of Juvenile and Family Court Judges for his exceptional service in advancing juvenile justice. The award is given annually to a judge with juvenile court jurisdiction who demonstrated outstanding service dedicated to the improvement of juvenile justice in Tennessee for the benefit of the children and families served by the state’s juvenile courts.

In honor of her friend and colleague, who she described as led by service and never seeking the spotlight, Judge Snyder shared a quote from Edward Everett Hale.

“‘I am only one, but I am one. I cannot do everything, but I can do something. And I will not let what I cannot do interfere with what I can do.’ Tim changed lives, so did Judge Ruben. Tim changed the judiciary for the better. Those of you who knew Judge Brock were changed by him. He changed the judiciary in the State of Tennessee. I challenge each of you, if you didn’t know Tim Brock, to ask those of us who did to share a story. He was the epitome of a man who got up every morning and didn’t think about how busy he was, ‘oh I’ve got to go to work.’ He was the man who got up and thought, ‘I get to go to work and how can I make lives better for people?’”

Judge Brock passed away unexpectedly on November 11, 2019 while attending a national judicial training in Nevada. He was 62. 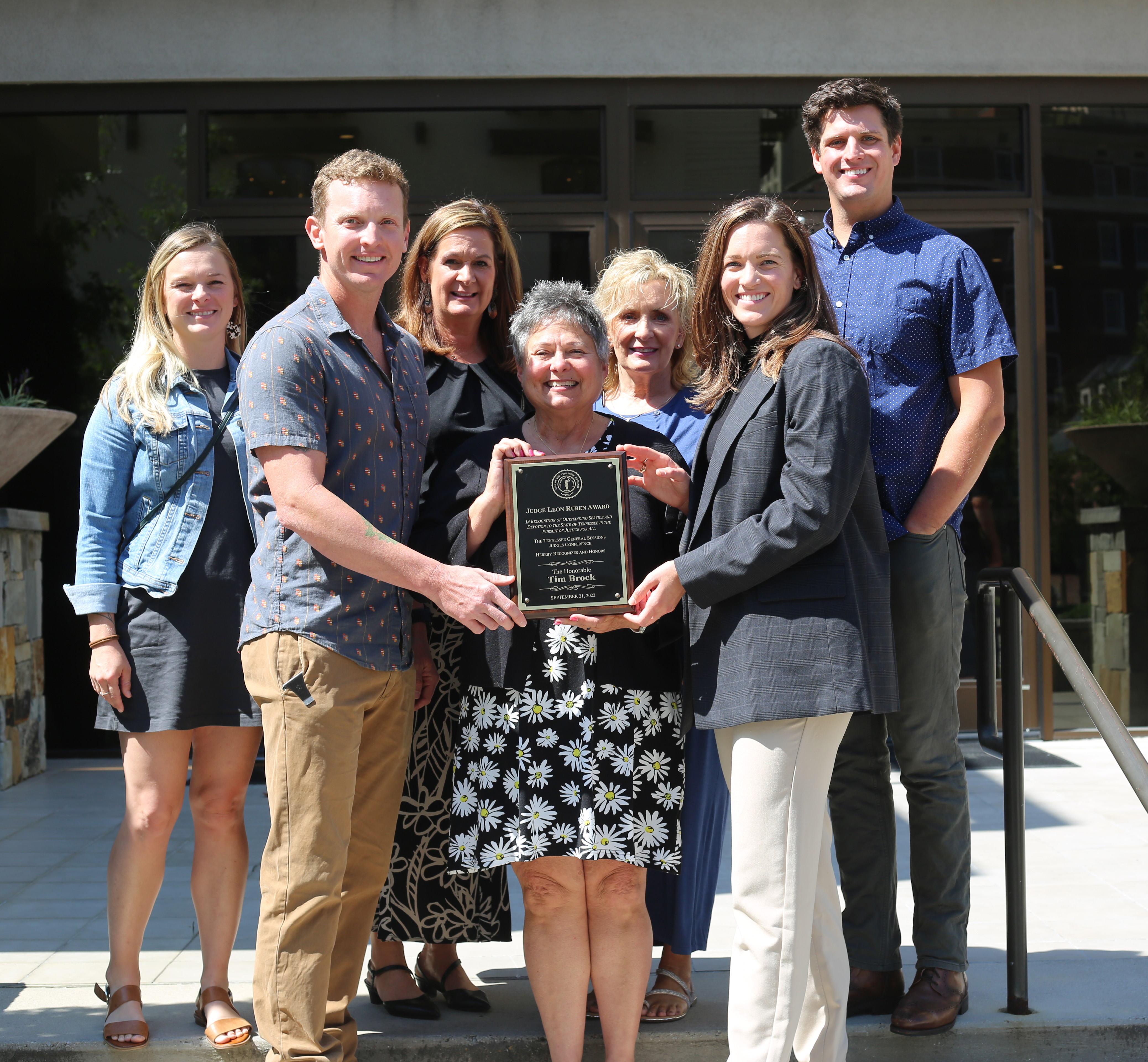