“It was one of the most raw and emotional events in my 32 years as an assistant district attorney, assistant public defender and judge,” said Henry County General Sessions and Juvenile Court Judge Vicki Snyder.

Judge Snyder was particularly moved by the words of a local high school educator who painted a shirt representing child sexual abuse, and spoke about what pain and healing look like.

“I walked over to her and hugged her and thanked her for her courage,” said Judge Snyder. “When you deal with child sexual abuse, rape of women and domestic assault every day for 32 years, you are vicariously traumatized. I told her she helped me. She looked at me funny. Even though I may not be a victim in the terms defined, I am traumatized seeing photos of children who were abused.”

Judge Snyder was invited to join the project by Jane Etheridge, a retired counselor from the Women’s Center at Murray State University, who now teaches a class on domestic violence for Phases to Freedom.

“I started to think what can we do and I had a clothesline project at Murray State, so I suggested it to them and they loved the idea,” said Etheridge. “I honestly thought if we got 30 people to tell their stories or to honor a loved one who died because of domestic violence, that would be amazing. Instead, we have 90 voices.”

Etheridge encourages participants to decorate both sides of their T-shirts. The back depicts the impact or the pain of their story. The front represents the healing process and their hopes for the future.

“I do introduce the project by saying there’s so much silence, there’s so many misconceptions or misunderstandings,” said Etheridge. “The number one question in domestic violence is, ‘Why didn’t she just leave?’ I love that word ‘just.’ Boy, people do not understand. ‘I don’t understand, if she had just said no’ or ‘if she, as a child, had just told somebody what was happening to her.’ I talk about those things. The overt or inadvertent blame that is misplaced on a victim instead of the abuser, which is what happens all the time. We talk about why that is, in terms of people wanting to believe they’re safe. If I can distance myself from what happened to someone else, then I’m safer.”

“She supported it as a judge and made it possible, along with United Methodist Church,” said Etheridge. “Someone donated to the church for domestic violence. Nobody had to bring supplies. It was all paid for.”

“I went to the church and walked in the room of T-shirts, and I’ll say it took me back,” said Judge Snyder. “It took my breath. I had to pause and I sat down. Jane told me how they were doing it. I went around and looked at 15 to 18 T-shirts in that room. I looked at every T-shirt and Jane would tell me what something might mean. I was there an hour and a half and it changed me. It was life altering. The emotion that these women and children poured out on a T-shirt. To say that you put down on a T-shirt what happened to you, that’s an understatement.”

Judge Snyder spoke at the event, talking about one of the shirts that touched her. Her speech was shared with that domestic violence victim.

“It made her sob,” said Etheridge. “Most people would not have survived what she went through. She wrote a letter to Judge Snyder to tell her she felt validated for her ability to survive and she helped her heal. That to me is a true judge. I am beyond grateful.”

To date, the Clothesline Project has collected 90 T-shirts. It’s hoped that the program will continue to grow, in an effort to bring awareness to the prevalence of domestic violence. 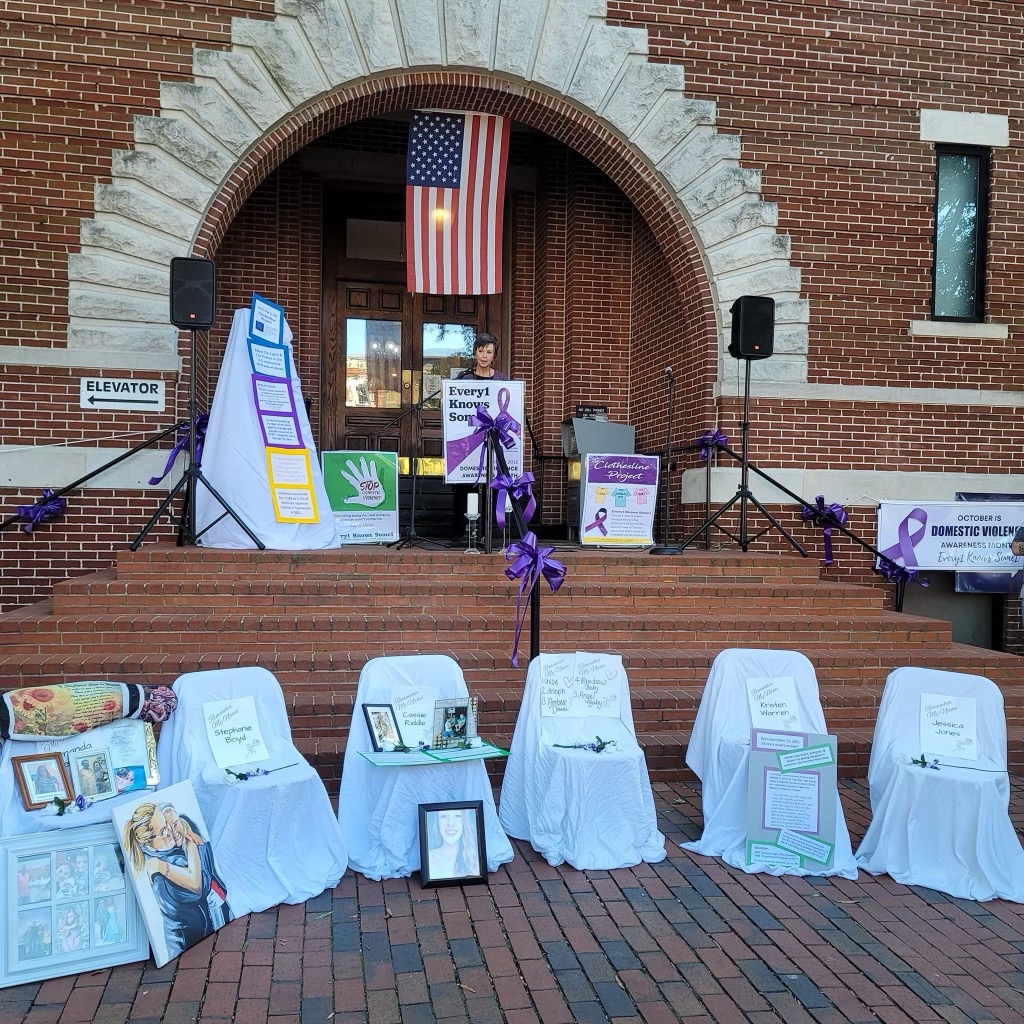